So Alice suggested I put a little piece together for her blog. Naturally this filled me with a combination of trepidation (she’s a tough act to follow) and pride (flattered that she would even want me to in the first place). Ever her harshest critic, I am wary and I apologise if there are far too many family ‘in’ references.  Alice will explain I’m sure.

Whilst this whole experience has been a huge eye opener, ‘bemused’ was the word Alice used so accurately in her first post, this modern phenomenon of the blog has made it possible to get an insight into areas that perhaps previously one would not have spoken about so openly. It has allowed us to see Alice’s journey (ugh – a highly despised word in our house  – but somehow so apt here) through her extraordinary eyes and wit. I would, however, like to clarify that it doesn’t make it any easier, just that we feel more informed.

As parents we are always in awe of our children’s achievements (regardless of how little we may show it) but nothing could have prepared us for the immense pride we have for both Alice’s stoicism and her positivity, neither of which we recognise as coming from us. It seems a little strange penning this in the knowledge that she is going to be reading it before posting, almost American in its openness, especially from an awkwardly British and reserved family such as ours, but what the heck. The grit with which Alice is facing her challenge is nothing short of remarkable. Her writing though is no surprise.

I’ve always known she was a writer from an early stage. We’ve got hours of footage (much to the annoyance of her siblings) of her with books, seemingly reading them aloud when in reality she was simply reciting stories that we had read to her over and over again. This led to her voracious appetite for books, and being lost in the written word for days on end. I’ll always remember the guerrilla reading challenges with her older cousins on the launch day of each Harry Potter and a race to the finish. This and future literature has resulted in a wonderful command of the English language and an ability to write material that is really rather readable, whatever the subject.

I still have in my desk a short story in her spider writing from year six that was my first realisation of an ability that might one day bring back the nineteenth century notoriety of her surname. Naturally I shall be keeping this for auction in about twenty years. A man’s got to eat.

When Alice was first diagnosed with MDS, our world just stopped for a little while.  One of my early thoughts (apart from ‘why her’ of course) was to wish that my father was still with us as his strength and kind gentle words would be a huge source of comfort for us all.  This was swiftly followed by a sense of relief that he wasn’t here to witness it as I know it would have broken his heart to see his little granddaughter with such a battle on her hands.  Now the world has started moving again and we’re all ready to fight.  Family and friends have been, and continue to be, a huge army behind us and we will always be grateful for that, however closed and reserved we may appear to be.

We can be grateful for the blog of John Underwood that appeared at roughly the same time for her decision to catalogue this for anyone that may wish to follow it.  However, it took a little push to begin with.  I knew she was capable but Alice still has a level of confidence in her ability to rival that of George McFly.  If you’re unfamiliar with the Back to the Future reference then that may be lost on you. 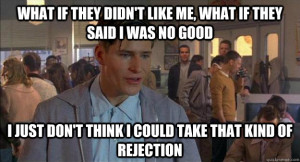 Anyway, the words ‘what if they said I was no good’ appeared frequently and thankfully these fears were allayed when you all responded so generously with such positive feedback. I have never had so many people tell me that I must be very proud.  And I am.

If there is one lesson I have learnt during this episode in our lives it is not to put off doing something that you know is right.  When Alice was born 20 years ago, Sharon received eight units of blood (about the same amount that she had started off with).  At that point I vowed to give blood regularly.  Needless to say it was a grand gesture that I never followed up.  When her brother Hugo was born, a further two units were needed and I repeated my pledge, only to fail again.  It was tricky, nowhere handy, didn’t have time….all the usual excuses.  It was just two years ago when I spotted the blood vans handily located in my village that I finally got around to it.  I have now given six units.  Alice has received fifteen.  So far.  If you are reading this and you haven’t already done so, please give yourself a little push and register with either Anthony Nolan or Delete Blood Cancer.  It’s a cheek swab to register (all of 120 seconds) and you might have a one in 900 chance of being asked to donate – to save someone’s life.  Can there be a greater feeling? If you think ‘donating’ sounds a bit scary it really isn’t.  No operations or anything, just a slightly extended session of giving blood. Jump onto the Anthony Nolan website and have a look at the blogs of those who have actually done it.  What comes across as the only slightly scary bit is having to watch daytime TV.  There’s only so much Jeremy Kyle you can take in one sitting. Incidentally, when you have done this, please don’t keep it a secret.  Tell all your friends via Facebook, Twitter, or any other way you feel comfortable with – perhaps even in conversation – and encourage them to do the same.

When we first came across the bone marrow register in July there were about 23 million people on it.  There are currently 27 million.  Whilst Alice is not going to take credit for all of the 4 million extra I know she is responsible for quite a few of them.  She was recently number three on the list for the reason people were signing up with Anthony Nolan so has clearly made an impact. I only wish that I had registered some 36 years ago when I was 16.  Whilst I would not have been able to help Alice, I might have been able to give someone else somewhere in the world that precious gift of life.  I’ve got nine years left on the register, so who knows?

So there we have it, I’m sure that’s enough from me for now. If I get asked back as a guest speaker further down the line I will gladly accept. If not, I will be more than happy to watch from the sidelines (and continue to bellow my support). Not that I need a blog to say this but Alice, we’re all here with all of our love every step of the way.