When I first trotted off to Cardiff University two years ago, armed with a carful of rubbish that I didn’t need and no idea of what to expect, I moved into a perfectly mixed flat. Three boys, three girls, all on a range of courses. It was all pretty well organised.

In second year, I moved with my friend Joy into a dank student house.

But we weren’t alone, and I’m not talking about the rats. We were accompanied by four loud, often-messy, always-funny boys. Sorry. Men. I have fond memories of my time with them, but thought I’d write about my thus-far limited first experiences living with just girls this year. Living with only one other girl last year meant that she and I had to toughen up and not whine about the toilet seat being almost permanently up. But now things have changed. So here’s what I’ve learnt so far:
1. Girls, surprisingly, use just as much toilet roll as boys. Who would’ve thought it? 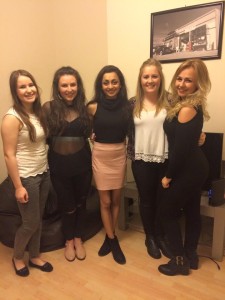 2. “In a bit” is no longer as appropriate a goodbye as it was when living with boys. Now this must be substituted, on the most part, for ‘love you!’, or variations such as ‘love yaz’, and ‘lots of love, honey’. It may just be the enthusiasm of the girls I’m living with, but declarations of affection are not what I’m used to.

3. Every evening starts with the ‘catch up’ period. Within this half hour, you must disclose every relevant detail of what happened to you that day. Course gossip, odd-looking people you’ve seen on campus, the day’s speculations about a Bake Off contestant, all of it. Everything.

4. Following on from that, any other minor details must be shared, and periodic updates on them released. Last week I booked a doctor’s appointment simply to get some cream for a very faint rash on my chest. My housemate was shocked that I hadn’t told her about it before, despite it being so small I almost forgot about it myself.

5. Trash TV is the Holy Grail. And I’m not talking the odd episode of Come Dine With Me, that any student can get into. I mean true, true, trash. Think Ex on the Beach, First Dates, and other bizarre “dating” shows. Worse than TOWIE. Seriously.

6. That said, at least the TV standards are so low that you know you won’t ever be judged for watching Catfish in the middle of the day. Programmes like the X Factor suddenly seem as intellectual as a BBC documentary about the Holocaust.

7. Hair. Hair everywhere. We girls apparently all moult like dogs. I find hair all over the shower, on the carpet. I found hair in the kitchen sink the other day. WHO IS BRUSHING THEIR HAIR OVER THE KITCHEN SINK?

8. It is okay to pee with the door open. Somehow. This would just not hold up in front of boys.

9. Laundry days always manage to coincide. You kid yourself you’ll “wash stuff together to save on water”, but you always have TOO MUCH LAUNDRY.

10. Following that, there is not enough space to hang said laundry. Your hallways will always be filled with dryers, usually covered in Primark-esque leopard print underwear, while the ‘good pants’ get a spot on the radiator.

11. Texting each other from the room next door, or, at a push, hollering up the stairs, to check what they’re wearing for a night out is a vital stage of the getting ready process.

12. The rest of this process then takes hours. Real hours. So long you think you may just skip the night out, take off the false eyelashes you applied all those hours ago, and go to bed.

13. You become an expert at avoiding your own work by nagging a housemate to do hers.

14. There is almost always at least one girl on a health kick.

15. But you WILL watch her cave, under the influence of a particularly vile hangover, and surrender herself to a plate of beige-coloured carbs.

16. Despite how “bad” your music taste is, you will never be judged for listening to cheesy pop. Same goes for the soundtrack to the odd musical.

18. Everything that has a possibility to be done together, must be done together. Lectures at the same time? You stride into uni in synchronisation. One girl is two episodes behind you on Suits? You must wait for her to catch up before you watch the next one. It’s the law.

19. Lounging, sometimes upside down and often taking selfies, on one girl’s bed, is a perfectly valid use of your Monday afternoon. Or even Saturday night, by the time you get to third year. 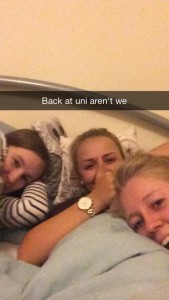 20. Boys can actually be more bitchy than girls. Who knew?!

21. You will invest in things. Real, adult things that you wouldn’t have bothered with when you lived with boys. Things like wine glasses. And sofa cushions. Maybe even the odd coaster.

22. Boys will invite you round to their house, and you will look around in horror. That plate of pasta your housemate left on the side earlier? Not a big deal compared to this.

23. Plus, the enthusiastic welcome you receive when you cross the threshold back into girl-dom? So worth the time away from them. Girls are great, honestly. 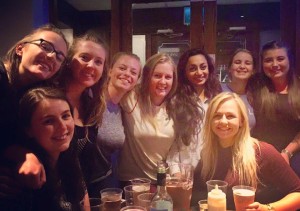