So it’s officially over: my final ever fresher’s week, or more accurately, fresher’s fortnight, has drawn to a close. Although I’ve only ever had three of these, it truly does feel like the end of an era, like I’m saying goodbye to a tradition that has taken up a huge part of my recent life.

And with the end of fresher’s week comes the end of nerves, of meeting new people, of spontaneous nights, of free entry into clubs, of a solid week of drinking, of daytime TV, of eating nothing but carbs. 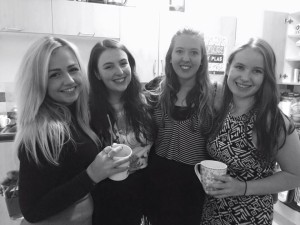 So what have I done these last two weeks? Well, I had a total of seven visitors from home, I had a perpetually full bedroom that smelled of sweat and unwashed girl, I ate two takeaways in a day, I indulged in two-for-one cocktails, I bought a shed load of new winter clothes, I played beer pong, I cheered on England in the rugby world cup, surrounded by pints and voices hoarse with hope, I learnt some ridiculous new dance moves, I signed up to volunteer with two charities, I learnt that one should never go to Lidl after 1pm, I sang until my throat ached, I spent seven hours in a hospital waiting room after convincing myself that fresher’s might be killing me, I begrudgingly cleaned our house after a party, and I drank a lot of cups of tea, and almost as much alcohol.

And now I sit here with a freshly-blended smoothie, after finally listening to my body’s cries for nutrients, trying to nurse my hacking cough. Would I say that the last fortnight has been culturally enriching and diverse? Not one bit. But do I regret it? Absolutely not. I’ve learnt that even in your final year, it’s not too late to make more friends, find new ventures to pursue and ultimately make some of your best memories.

I’m sentimental as hell and I cannot bring myself to care. As much as I’m kicking myself for not getting involved with all the opportunities around me before now, it’s far too late for regrets, I’ve just got to sign up and get the hell on with it. As I said in my last post, and as Aerosmith also professed, I don’t want to miss a thing.

And yet, sometimes I have. I have missed out on things. As much as I promised myself I’d be careful when I heard I could come back to Cardiff, I didn’t think that being ill would hold me back, not really. But things have changed. Last night, my friends all headed out, and I stayed in, nursing this cough and a recent insomniac tendency. It’s funny, isn’t it, FOMO*? It makes you look at the world differently.

*that’s Fear of Missing Out, for you, Dad.

I, for one, have become a little bitter. I’m still learning how to cope with university whilst being ill. I think it’s different to what being at school with an illness would be like. Here, there are a lot of people I don’t know, even more people who I do know and wouldn’t just bring it up in conversation with (I’ve discovered that illness is a huge conversation killer, especially when it follows “Yeah, I went interrailing, it was amazing, how was your summer?”). You don’t have as much one-to-one contact with your lecturers or tutors, so working out who needs to know is another minefield, and working out if it’s even relevant is a whole other ball game. Thinking about blood work and wondering what’s going on deep in my bone marrow has become a huge part of my life, and it’s easy to talk about with my friends, but with teachers, superiors, how do you say it? Do you even need to tell them? Will they be able to do anything if they hear that you might not even be here for the whole module? Or would they still just be unable to distinguish you from a name on their particularly large register?

It’s also a lot easier to hide at uni than it would be at school. Registration is a lot less strict. Lecture notes are online. Tutors can’t always remember your face enough to run after you in the corridors and ask where you were on Wednesday. It’s easy to hide under your duvet all day with a packet of biscuits and forget that your seminar prep exists. And this is where I need to thank my housemates, Oscar acceptance speech similarities unintentional. 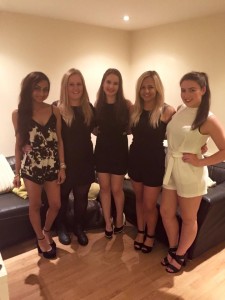 They kick me out of bed if I have an early lecture, they help me make decisions about whether going out would make me feel ill without making me feel smothered, they encourage me to eat well, both with their own healthy eating and praise for my culinary efforts, they check up on how I’m feeling that day, and even when I don’t want to listen, they’ll always nag me to go to the doctors.

I’m so, so lucky to have them because most people would skirt around the subject, try and make me feel normal, but they let me talk about my worries whilst also not letting them be the only thing I think about, which is great.

But (and I’m sorry for the rambling), illness still does change you. I’ll be having a perfectly normal conversation with one of them and then I’ll go on my phone and check Twitter, and all I’ll see on my feed is cancer, cancer, cancer. I’ve followed a lot of illness-based blogs to inspire me, along with online forums for MDS support, and blood cancer awareness. I’ve also joined the Cardiff Marrow society to encourage students to sign up to Anthony Nolan, and I see a lot of their updates too. I have to keep reminding myself that I’m one of the lucky ones (I am back at uni, I don’t have leukaemia), but it isn’t always easy.

As I said earlier, I’ve even become a little bitter. On a bad day, I’ll sit in a seminar group, perhaps with people I don’t know, and I’ll hear them stressing about their dissertation, or how their housemate stained that top they wanted to wear to Revs tonight, and the voice in my head will just think “But you aren’t ill, and you aren’t ill, and YOU aren’t ill. You haven’t been in hospital, and you haven’t had fertility treatment, and YOU aren’t at risk of cancer”.

Obviously I acknowledge that this is completely irrational. It’s like saying we shouldn’t moan about getting food poisoning from a restaurant because there are starving children in Africa. Obviously everybody has a different perspective, it’s just that mine has been altered far beyond those of the people around me. I tried to do something normal, for example, and go to a meeting with a lecturer about how I could catch up with some work. I arrived early and had to wait outside her office for ten minutes while she spoke to another student, and the time on my feet completely took it out of me, resulting in my first face to face meeting with this professional beginning with her finding me hunched on the floor, sweating and out of breath from the stairs, eyes welling up. All very embarrassing for us both.

Sometimes I don’t know whether I should worry about my dissertation or whether I’m getting behind in Gothic Fiction, or whether this cough and my pale face is a sign that leukaemia is looming, or my next upcoming bone marrow biopsy.

What I’m trying to say is that, in the last two weeks at uni, I’ve gone from “I got this” to “I need to drop out and live with my Mum forever” more times than I’ve seen an Instagram photo of avocado on toast.

But I’m getting through. I’ve panicked a couple of times about unexplained bruises, strange infections, and I’ve slept through a lecture after a bad night’s sleep, something I promised myself I’d never do again. But I’m trying to adapt, and with all the support around me I can’t really go too far wrong. Living with a hypochondriac helps!

I start my care at the hospital in Cardiff next week. I’m due a hefty transfusion, and I’m nervous but excited to meet the haematology team there. I’ve also got non-medical stuff to look forward to. As I type this I’m on a train home in the October sunshine to give a presentation to my old school about Anthony Nolan, and how they can fundraise for them.

What I’m trying to say is that life’s small comforts are pretty great, really. Be they a presentation in front of my brother and sister, an upcoming movie night with my housemates, or my Mum inevitably  using my twenty four hours at home to force cough medicine down me. I can drink to that, fresher or no fresher. 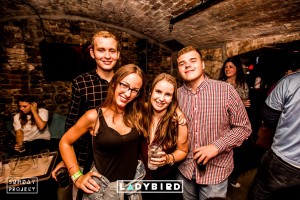