Let’s be clear about a few things:

(Short Disclaimer: occasionally I will still have a little panic and write an illness-induced word vomit to share with you all, gotta keep the drama levels high and all.)

So this is a little moan with a product review included (sort of).

I am the most lazy person in existence when it comes to my hair. I’ve never so much picked up a packet of dye in Superdrug, wouldn’t know what to do with hair serum (WHAT IS YOUR PURPOSE?!), and every morning, I wash it and leave it to hang wet and dripping until I stop noticing it. Not a hairdryer or pair of straighteners in sight.

When told that I’d have to have chemo at some point, my first emotion was one of crossness; although I do nothing with my hair, I’d finally, FINALLY grown it long enough to use the ‘mid to long’ shampoos, and tie it up in a non-pathetic ponytail that I could flick people at work in the face with if I wanted to be sassy and turn my back dramatically. I felt these were notable achievements, but unfortunately they’re not recognised by chemo drugs. Sigh. My second emotion was gratitude. That lazy little subconscious realised that, “Hey, now you don’t even have to wash it!”. I’m about to have an even more low maintenance appearance, and won’t have to feel guilty about being asked if I’d just been swimming by the checkout girl in Sainsbury’s, when, actually no, I’d just been too lazy to even blow-dry it.

Don’t get me wrong, I’m still a little peed-off. No one in the very small circle of people I’m close to who have been told they’re going to lose their hair are ever thrilled to bits, so I’ll have a little (big) weep when it eventually starts falling out, but I’ve got time to enjoy it until whenever that may be.

My eyebrows, on the other hand, they can go. Since when have eyebrows become such a massive focal point of most of the teenage girl/adult population and WHY am I suddenly feeling guilty for being so damn lazy when it comes to plucking?! I’ve noticed those over-plucking teenagers of our youth have started drawing theirs on completely from scratch, so, despite doing what my Mum always told me to and leaving them alone, I’m about to join your sub-culture. Hi.

Always a silver lining, no?

ANYWAY, I was looking for a way to make my hair even more low-maintenance, because suddenly, after my diagnosis, there were clumps of it coming out in the shower, in the one-time-per-day I brushed it (which drives my friend Claire insane), and staying on the pillow when I sat up in the morning.

I had heard that when your body is run down, and (in my case), when your bone marrow is working overtime, your poor hair can sometimes get neglected, and start rebelling as a result. Again, I was pretty cross. Sort of: No, hair, you’re supposed to fall out during chemo, not before it, dammit.

I spoke to my hairdresser, who has long despaired over the state of my hair. I get it cut once every three months, in order for it to grow as much as possible, and therefore have frequent split ends, and constant knots due to my lack of regular brushing. She ended up chopping off about an inch and a half of it, something I’ve never allowed her to do in the five years I’ve been visiting her, and she recommended a couple of simple products that have changed my life. These are Batiste dry shampoo, a tangle teezer and Aussie conditioning spray. These are all available in Boots, or even your local Tesco, probably.

I’ll admit I’m a little late to the party with dry shampoo. I can’t stand the smell so just continued washing my hair every day, something I’ve learnt is just going to encourage the breakage, but this one is a ‘floral and flirty blush’, and it’s PINK, and smells more summery, therefore encourages me to use it despite all the thick white powder that temporarily dyes my roots grey.

I’ve been using Aussie conditioning spray for a while, but the one I’ve got now is specifically for ‘weak, distressed hair’, which is pretty accurate. My poor hair is definitely more distressed about this whole thing than I am, so much so that it felt it had to detach itself from my scalp in a desperate attempt for me to notice it. Bless it.

This spray also means I can wield my shockingly pink tangle teezer without ripping half my hair out, and sometimes I even brush it more than once a day. Claire must be so proud. 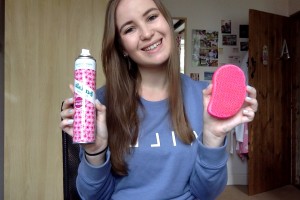 Look how sleek and shiny my hair is now, eek!!

Occasionally I still go to hug someone and they’ve got a sizeable group of my hair strands hanging off the back of their shoulder, but overall it’s just so much healthier now. Having a chop, although a relatively minor one, was heartbreaking, but I would totally recommend it to anyone feeling a little run down and wanting to preserve your hair. AND I get to be even more lazy now, I don’t even have to wash it every day! If you’re one of those people who, like me, is cursed with greasy hair and spends about 34% of their time envying that other half of the population who can easily go a day without washing it, you can be one of those people too, thanks to Batiste!

Like I said, I’m pretty late to the party, but I’m here now, and as enthusiastic as if I’d been here the whole time.

Here’s my hair in April: 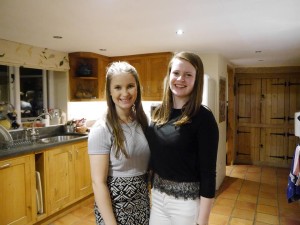 So long and all that, but in hindsight, it was dry and splitting all the way up. My Mum is thrilled now I’ve said goodbye to the rats’ tails, and she doesn’t have to pull as many clumps of someone else’s hair out of the shower drain (hopefully).

It’s a little cruelly ironic that all these beautifully simple products I’ve so recently discovered reside in the same house as the wig brochures that I’ve been poring over recently (who knew they were a thing, eh?), but I’m feeling pretty damn hopeful that they’re going to stay at the bottom of my reading pile for now.